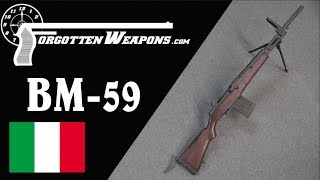 After World War Two, both the Beretta and Breda companies in Italy began manufacturing M1 Garand rifles. When Italy decided that they wanted a more modern selective-fire, magazine-fed rifle, they chose to adapt the M1 Garand to that end rather than develop a brand new rifle. Two Beretta engineers, Vittorio Valle and Domenico Salza, began work in 1957 on what would become the BM-59. Prototypes were ready in 1959, trials were run in 1960, and by 1962 the new weapon was in Italian military hands.

The BM59 is basically an M1 Garand action and fire control system, but modernized. The caliber was changed to 7.62mm NATO, and the barrel shortened to 19.3 inches. A simple but effective selective fire system was added to the fire control mechanism, and the en bloc clips replaced with a 20-round box magazine (and stripped clip loading guide to match). A folding integral bipod was added to allow the rifle to be used for supporting fire on full auto, and a long muzzle device was added along with a gas cutoff and grenade launching sight to allow the use of NATO standard 22mm rifle grenades.

In this form, the BM59 was a relative quickly developed and quite successful and well-liked rifle. In addition to the Italian military, it was purchased by Argentine, Algeria, Nigeria, and Indonesia. A semiautomatic version was made for the US commercial market and designated the BM62, and a small number of fully automatic BM-59 rifles – like the one in this video – were imported into the US before the 1968 Gun Control Act cut off importation of foreign machine guns.

If you enjoy Forgotten Weapons, check out its sister channel, InRangeTV! http://www.youtube.com/InRangeTVShow