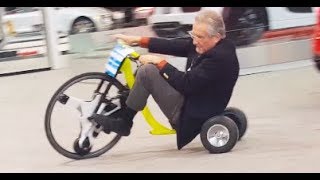 The winter weather in Boston may flip flop between bitter cold zero degree temperatures and balmy, near-60 degree absurdity but one thing is certain – there’s plenty of fun to be had this weekend at the New England International Auto Show at the city’s Convention and Exhibition Center.

A showcase for all things transportation, this annual event, which runs through Monday, Martin Luther King Day features more vehicles from worldwide automobile manufacturers than most of us will ever see in a day.

Some, including the 2018 Toyota RAV4 Adventure and the redesigned Jeep Wrangler are making their first public appearance to a large New England audience.

This region has proven itself as the place where the all-electric Nissan LEAF does most of its sales and the automaker is counting on that trend to continue, showing the latest version of the zero-emissions vehicle complete with its Pro-Pilot Assist suite of near-autonomous driving technologies.

Of course, with crossovers dominating the automotive marketplace these days, new entrants in the segment, such as the Mitsubishi Eclipse, hope to make inroads via the auto show’s large audience. Meanwhile, exotic performance sport cars like the V12 Aston Martin Vantage seem content to simply tantalize and intoxicate our senses.

Interestingly, a mode of transportation much different from these has really captured our attention.

Cambridge based GeoOrbital has taken command of the E-Mobility pavilion at the show with their innovative reinvention of the wheel that transforms a standard bicycle into a powerful electric bike in less than a minute. It can be used in lots of other applications, as well, from wheel chairs to a three-wheel drive DIY contraption the company lovingly refers to as the ‘rust bucket’.

While at the pre-show press event, RPM News did some test driving of a bike board and a big-wheeled tricycle fitted with the GeoOrbital wheel and had an opportunity to chat with two of the company’s founders, Mike Bertov and David Cohen. Here’s what they had to say about their revolutionary product, after which we’ll conclude with a montage of clips from the 2018 New England International Auto Show.

For more of our automotive news coverage go to RPMNewsWeekly.com