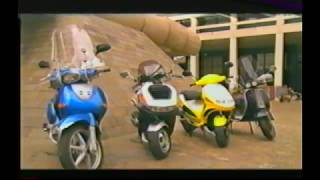 Since 1959 to today Italjet has developed more than 150 different innovated models of motorcycles and motorbikes designed with an entrepreneurial enthusiasm that remained unchanged from the foundation to the third generation currently working to strengthen the national and international image of the company.

The same property united and led for over forty years by the family Tartarini, consistent in giving continuity and development to its innovative philosophy that today characterizes loud and clear, the company and the brand Italjet in Italy and in the world.

The result of this philosophy is simple: innovate, anticipate the tastes and fashions, to stay ahead, one step ahead of others.

“It ‘a way of thinking that comes from competitions, where you have to be determined to achieve your goals, always anticipating the opponents,” says the founder Leopoldo Tartarini.

This determination combined with endless enthusiasm and passion for all that is motorcycles and engines was transmitted to children not only through the chromosomes but making her breathe day after day and to cultivate it with the example and the memory of the great sporting achievements made.

On 14 February 1980 comes the recognition that alone is worth a career.

The design department of the Museum of MODERN ART NEW YORK, the prestigious MOMA, tells Leopoldo Tartarini the decision to exhibit in the permanent collection of the Pack 2. It’s the only motorized vehicle with two wheels housed in the museum.

But, in 1998 when the Guggenheim Museum in New York decided to select a few examples of motorcycles and scooters assigns the only award sole scooter which is then exposed: the Formula 50 Liquid-cooled and already nominated four times of the scooter ‘ year in Germany, Spain and Italy twice.