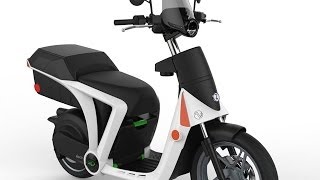 Reportedly, Mahindra GenZe, the first electric scooter from Mahindra Two Wheelers is about to launch in US by end of this year. Expecting its price tag of 3,000 US dollars approximately, the electric scoter scores handsomely on the looks and aesthetics by deploying the utility DNA in its every bit. It is bolstered with the basket on the rear of rider for carrying cargos like groceries, laundry, and such. Below the seat, there is a space to carry phone, tablet or a small laptop, which though can be charged using a USB. This futuristic scooter of Mahindra doesn’t receive speedometer, instead it dwells a seven-inch weather-proof touchscreen tablet in its place, which allows users to use GPS and listen to music on the go.
On the technical front, Mahindra GenZe dwells a 1.8bhp motor, which runs approximately 50km on a Single Charge and attains a maximum speed of 50kmph
Hence, India launch of GenZe is speculated, but the US will taste it first, followed by China.