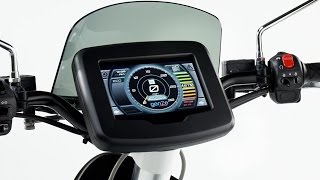 The GenZe 2.0 was launched, in the City of Oakland at the Council Chambers by Anand Mahindra, chairman of the board, M&M and mayor Libby Schaaf.
Deliveries of the GenZe 2.0 has begun to depositors and there are now happy customers riding around on their new GenZe’s in the Bay Area, Gen Ze officials said. “While we expect the GenZe 2.0 to become a popular car replacement option for retail consumers, we also expect it to become a viable first and last mile option and shared transportation for our cities such as the City of Oakland,” said Vish Palekar, CEO of Gen Ze.
The first product Mahindra GenZe is introducing is an electric two-wheeler, designed for students and urban commuters. “We wanted it to be the most efficient fun urban vehicle in the world. That was our promise. We are calling this first model Genze 2.0,” Palekar said.
The GenZe 2.0 weighs less than 232 pounds. This is lighter and easier to handle than most motorized two wheelers. The battery with the integrated charger is 31 pounds. This has been configured to provide an optimal range of 30 road miles and also provide the ability to charge on the “go”. This meant an integrated onboard charger than adds 5 pounds to the weight.