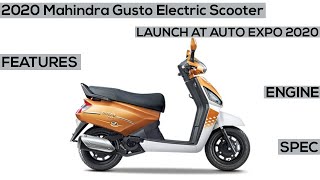 Mahindra’s top official had confirmed to a media publication that they are contemplating on entering into the electric two-wheeler space. The report also mentions that this e-scooter will be based on the petrol-powered Mahindra Gusto, which has now been discontinued in India.For the battery and motor of this upcoming offering, Mahindra is likely to take inputs from the Genze electric scooter, which it already sells in the US. It will reportedly be powered by a 3kW motor with a top speed of around 50-60kmph and a battery range of about 80km. What makes this believable is the fact that the Pegueot E-Ludix scooter also rides on a 3kW motor, which Mahindra manufactures at its Pithampur plant and exports to Europe. Furthermore, the e-scooter is also believed to have already received ARAI-certification. Notably, Mahindra couldn’t manage to establish a strong foothold in the conventional two-wheeler space in India. That makes it logical for them to focus on the electric two-wheeler segment instead of focusing on the BS6 transition of conventional vehicles.