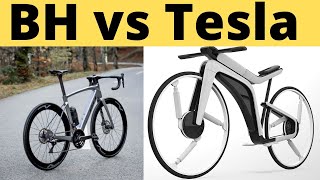 While Elon Musk hasn’t confirmed Tesla’s interest to build an electric bicycle, this e-bike from the BH Bikes has a 225 km of range per single charge which is roughly 136 miles.

Bikes and e-bikes are huge in Germany and Tesla could easily build them and sell its employees at cost or below. Then the demand for Tesla e-Bikes would grow as more people would see those cool e-Bikes that Tesla employees at Giga Berlin were driving. In fact, Rüdersdorf, a German city not far from Grunheide, where Tesla is building its Giga Berlin factory is already planning to express bike routes for Tesla employees. In fact, Tesla is constructing 623 charging stations at Giga Berlin for its employees and visitors.

Now, while there is no official word from Tesla on e-bikes, combining lightness and high energy capacity, the latest electric bike from Spain’s BH Bikes announces record range.

You know, it is not only in the field of electric cars where manufacturers are engaged in a race for autonomy. In the electric bicycle too, manufacturers are innovating to always offer more to their customers. This is the case of BH Bikes which has just revealed the BH Core, an electric racing bike capable of covering up to 220 kilometers in a single charge. This means the BH Core Carbon e-bike will reach 136 miles per single charge.

In the meantime, FedEx starting a new eBike delivery program in Canada to reduce emissions, but also Torque News learned that FedEx is running out of delivery vans and this may be yet another reason the company is piloting cargo eBikes. In any case, the news is good for electric bicycle lovers and our environment.

This is Armen Hareyan from Torque News. Please, visit us at https://www.TorqueNews.com for daily car sector news and follow us on Twitter at https://twitter.com/torquenewsauto for daily automotive sector tweets. And if you would like to support our channel, I would really appreciate buying us animated applause once a month by clicking on the applaud button, which is next to the Like button, if you are watching this video on a desktop.