Astra 902: Because More Rounds is Better 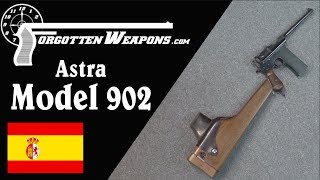 The Spanish Astra firm introduced its C96 Mauser lookalike, the Model 900, in 1927 to take advantage of the strong Chinese demand for that type of handgun. When Bestigui Hermanos introduced a select-fire machine pistol to the Chinese market, Astra quickly followed suit with their Model 910 and 902 in 1928. The 901 was really just a select-fire adaptation of the Model 900, while the 902 made an effort to compensate for the quite fast rate of fire (900 rounds/minute) by using a fixed 20-round magazine instead of the 901’s 10-round magazine.

A total of 7075 Model 902 Astra pistols were made, with the design followed in 1932 by the Model 903 and its detachable box magazines. In order to accommodate the extra-long magazine, the shoulder stocks of the 902s (all Astra 900-series guns were shipped with should stock holsters) had a deep opening cut out, which was then covered by a detachable leather boot to protect the magazine of the gun and close off dirt from the opening in the stock.

One very rare variant of the 902 is the semiautomatic-only type, of which only 50-75 were made (about half the number of 20-round Mauser C96 pistols). We have one of those to look at today, along with its intact original shipping box.

If you enjoy Forgotten Weapons, check out its sister channel, InRangeTV! http://www.youtube.com/InRangeTVShow