Building An Electric Motorbike…Out Of Plywood? 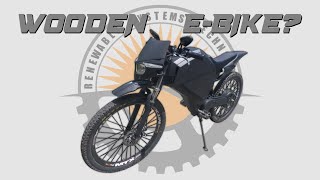 Get the plans for this project here: https://renewablesystemstechnology.com/electric-motorbike.html

This was by far one of my favorite builds. Everything went well, and the bike works great! As you can see in the video, the roads around here are so bad we’d almost be better off going back to dirt and grading it once a month instead (I had to drive on the shoulder of my street – that’s how bad it is). They’re rough, full of pot holes and raised culverts, and are a good test for the structural integrity of this bike. After 200+ km’s, so far I’ve had 0 problems and don’t anticipate any popping up in the future. This bike is solid. Its frame is basically a fiberglass reinforced glue-laminated beam, after all.

The motor is rated for 3000 watts continuous output, 5000 watts peak. It has loads of torque (max 85 Nm) for accelerating and climbing steep hills, a lot more than what I need. Top speed is rated at around 90 kph, but I’ve only had it up to 80 kph on these roads – they’re just too rough to go beyond that for a novice like me, I’m still getting used to driving that fast on two wheels lol. Regardless, it has no trouble keeping up to traffic or overtaking slow drivers, if need be.

The battery consists of ten lithium 40V/5Ah Greenworks yard tool battery packs, which are wired in a series-parallel configuration to create a 72V/25Ah bank (nominal voltage for the packs is actually 36V) – I kept the leads from the batteries to the terminal blocks exactly the same length so that the internal resistance is the same in each, that way the packs are all charged and discharged equally and maintain a perfect balance between them at all times. They have a BMS built into them, so that really minimized the job of making the bank. I’ve been using Greenworks yard tools for a few years, so I figured the versatility of using their battery packs with this bike would pay off. They were close to the same cost as purchasing individual 18650’s, so the choice seemed like a no-brainer to me.

In the video I take the bike for a ~35 km round trip from home to town and back, which took around 40-45 minutes and only used around 60% of a full charge (the time lapse of the trip is sped up quite a bit to save time, so use the speed settings in the Youtube player to slow it down if you have trouble seeing the speed and power input on the display screen). If I pushed it to the limit, I could probably get between 45-50 km’s per charge on avg terrain. Ideally, to make the battery life last as long as possible, they shouldn’t be drained more than 75% before recharging. This could mean the difference between replacing them in 2 years vs 10 years.

Don’t like ads? Neither do I. I hate them. That’s why I signed up for a premium Youtube account for $12/month so that I never have to see another ad on this site again, and feel good knowing that I’m contributing to the creators I like so that they keep posting more great content. I highly recommend it. If you’re just here to watch my videos, that’s cool too. You can help support me specifically by signing up for a channel membership instead. Then just keep an eye on the community tab to watch these videos free of advertisements. You’ll also get other perks, too. Check out the links below if you’re interested.