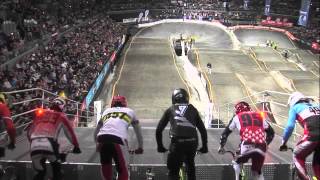 Inspired by their Motocross heroes, Californian kids in the 1970s started racing their bikes over the same courses when they weren’t in use. It quickly grew into a worldwide phenomenon, further enhanced by their use in the iconic scene in the film ‘ET’ when the friendly alien makes them fly to escape their pursuers.

Down on planet Earth, there are 2 types of BMX racing:

BMX Race
The BMX race is performed on a BMX track, measuring between 300 and 400m, with alternating jumps, banked corners and flat sections. 8 riders battle for first place. Besides the traditional BMX races, there are also Supercross races for Junior and Elite riders. These competitions are held on a spectacular BMX track with an 8m high start ramp and several pro sections with technical jumps. The Junior and Elite World Championships and the Olympic Games are raced on a Supercross track.

For more information and news on cycling, visit http://www.uci.ch or follow us on Twitter @uci_cycling. For more cycling videos and to watch live events our YouTube Channel can be found at http://youtube.com/ucichannel