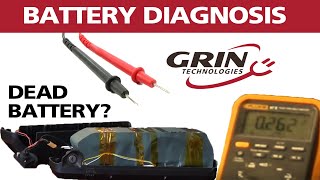 In this video, Peter opens up a downtube battery pack that is unresponsive to try and identify the cause and find out of it is repairable.

In general, if there is no voltage on the output port of a battery pack, it means that either
1) The Battery Management System (BMS) circuitry has tripped for some reason
2) There is a break in the tab welds joining the cell groups together
3) There is a failure in the on/off switch wiring or fuse
4) The cells are fully discharged to an irrecoverable state (less than 1.5 V/cell)

Items 1-3 are usually repairable, but the only way to know for sure if a battery can be repaired is to open up the battery pack and measure individual cell voltages across the BMS header, which is what Peter demonstrates in this video. If all the cell groups are balanced and over 3V each, then the issue is typically from a BMS circuit that has tripped for irrational reasons and replacing the BMS (or sometimes just unplugging and reconnecting it) will restore to an operating state.

If you have one or more cell groups that is noticeably lower than all the other cell groups, then there is either a BMS circuit that is draining that cell (such as a blown bleed resistor mosfet), or there is a soft short circuit in one of the cells (rare with quality 18650’s), or you have a broken tab weld on one of the parallel batteries causing the group to have lower capacity than the rest.

If you have a case where the cells are all between 2V – 3V, then typically that means that the battery has been in stored in a flat state and the quiescent current draw of the BMS circuit has drained the cells below the shutdown cutoff voltage of the BMS. In this case, you can usually trickle charge the pack at a low rate (say a few hundred mA) bypassing the BMS until all the cells are over 3V each, and then after that you can reconnect the BMS and charge it normally through the battery’s charge port.

If you have any cell group that is less than 1.5V, then the only way to properly repair the battery is by replacing the cells, at which point it is almost always cheaper and much faster to just buy a new pack. Do not try to recover lithium cells that have been drained below to low voltages like this, it very often results in a massive inferno.