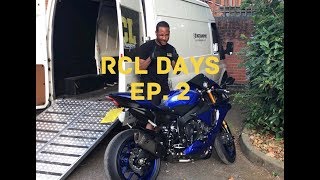 Thanks for tuning in to RCL Days Episode Two.

Featuring in this episode first up; is Alessio, a Honda SH125 owner, who his scooter was stolen 6 months prior. After losing all hope, the police contacted him to let him know that it had been recovered.

Also featuring were a 1200 cc Harley Davidson Sportster 48 special, going into a Harley Davidson dealership for some service work; and a Triumph Street triple being returned to our customer’s home after being at a repair centre for some time.

The beautiful Kawasaki ZX10R race bike featuring, was for a new customer who had some work done at PCR Performance up in Cannock, a motorcycle tuning company that we do some work for. We collected it from PCR Performance and returned it to his home. Check them out on instagram (@pcrperformance).

Next up was a stunning Ducati 848, collected from the Midlands for Yas, a really good customer of ours, and returned to his home in London.

The Suzuki TL1000 (widow maker) that was featured, was owned by a new customer of ours, and was collected and delivered to it’s new home.

We also took a trip up to Wigan Yamaha to collect an absolute beast R1 for a new customer.

The police impound, one of the most hated place was also visited to collect a TMAX that was also stolen and recovered for one of our good customers, Boris. His TMAX was stolen twice in London and he has written an article about his frustrating journey. Check it out at (https://www.bikerandbike.co.uk/this-stolen-tmax-story-shows-just-how-bad-motorcycle-theft-has-become/).

Our dear friends over at Urban Nomads Motorcycle Clothing store in Ruislip asked us to collect their beautiful Ducati Supersport 900 display bike to be placed in the shop.

South Wales was also on the list of our travels to collect a Yamaha MT09 tracer to be returned to London for another new customer.

A returning customer, Pierre had taken his tricked out Yamaha R6 to Rockingham Motor Speedway for a track day, but unfortunately he had quite a bad off, resulting in the bike flipping down the track. Luckily he only sustained minor injuries. Without fail, we went up to the track and collected it for him.

Featured was a Ducati Monster going in to a local mechanic. The beautiful Monster was an attempted theft, but as it was too secure to be stolen, the thieves took our customer’s exhaust end cans.

Some other bikes featured were also a Yamaha R1 going in to our dear friends at FWR in Kennington for some repairs; a very rare Suzuki Gemma 200cc scooter collected from our customers home and put in to storage.

For our friends at West London Motorcycle Centre, we collected a Suzuki GSXR that had been recovered from an unfortunate road traffic collision. Check out WLMC on Instagram (@w_l_m_c).

We also collected a 1978 Yamaha XS650 custom built chopper on behalf of WLMC. The beautiful machine belongs to a new customer and absolute legend, Charlotte. Charlotte rode it 4000+ miles across America, and had some truly amazing stories of her travels.

Last but not least, we collected an absolutely beautiful Repsol rep Fireblade for a good customer Hugo. This animal was added to his collection for the road.

I’d like to say a MASSIVE THANK YOU to everyone that featured in our VLOG – RCL Days.

Massive shouts to Wh05 DAT, for the filming and production. You can also find him  on instagram @wh05dat.

Thanks for watching, I hope you all enjoyed. Stay tuned for Ep.3, out Friday 28th September at 7pm!