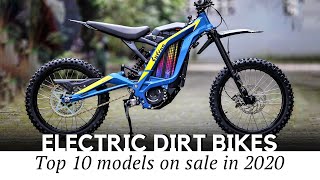 Dirt bikes were among the very first classes of motorcycles to get electrified, due to the riders’ lower range expectations and willingness to sacrifice some running time for the incredible riding dynamics that instant torque of an EV can offer. Through the years the number of such models has grown tenfold and calls for a separate video on our channel. We will be exploring the industry’s leaders and the all-new additions to the class that emerged in 2020!

Other EV-related content that previously appeared on #AutomotiveTerritory and may be useful to you:

Best electric superbikes that are on sale today: https://www.youtube.com/watch?v=REn6rczPT2I

Detailed info about all of motorcycles that were shown in this episode of #ATelectricbikes series:

The title of the world’s lightest electric dirt motorcycle is constantly changing hands these days. The latest claimant is Torp Bike based in Croatia, that has managed to compress the entire ebike package into 64 pounds.

Segway has recently taken a large stake in the Sur Ron startup’s ownership and apparently acquired the rights to produce this awesome off-roader under its own name. The LB now wears the X160 and X260 monikers.

In 2020 UBCO is abandoning the wheel hub motors design by bringing a trail bike with mid-drive frame. The FRX1’s chassis is made of 7000 Series Aluminum alloy, has ideal 50-50 weight distribution.

The original E-XC e-ride motorcycle hit the market in 2018, but it was available in limited numbers as a part of the KTM pilot program. In 2020, the bike returns to the US soil, targeting cross country riders and getting the same proven components as its KTM siblings in its class.

Electric Motion is a French manufacturer of trail and trial e-bikes that was established in 2010. This year, to mark the brand’s first decade on the market, EM renews its entire range, including the flagship ePure Race trial motorcycle.

Swedes absolutely knocked the competition out of the park when they released the premium specced Kalk Or back in 2018 and followed up with a road legal model & a year later. Their next creation is a more affordable, but just as impressive Ink.

By showing you the Segway X models, we have basically presented the Surron Light Bee, so we won’t go back to reviewing the same bike twice, but rather focus on its smaller sibling the all-new LB Youth.

We have known Kuberg Freerider moped as an awesome electric city bomber and a trail rider since 2016. With the Kuberg Ranger, the Czech Republic startup is taking a step up towards a fully-fledged dirt bike.

Zero FX is the company’s dual-sport offering that combines a powerful drivetrain capable of producing 85 mph top speeds and an off-road loving chassis setup that allows the FX feel right at home in trail, dirt and cross country conditions.

The French LMX was established by two fellow engineers and friends, who wanted to build lightweight, all-electric motorcycles suitable for motocross. In 2017, the company released their first freeride bike, called the LMX 161-H.

Developed by the company’s R&D division in Turin, the Rally edition is a completely new bike from the Italian Tacita that combines all of the best features of the previous T-Race motorcycles.